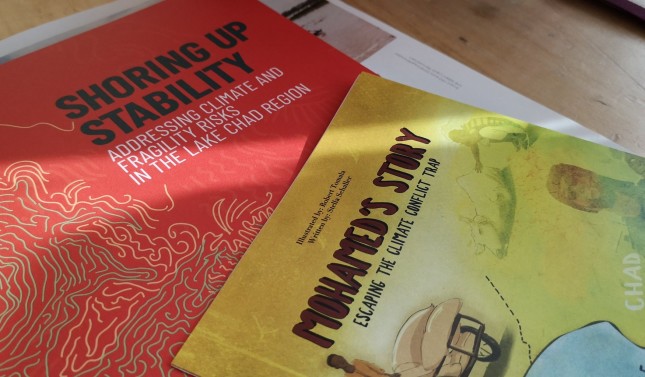 Years ago, Mohamed’s family had enough to eat, despite being poor. His daughter owned a vegetable stall at a bustling market in northeastern Nigeria. The family had options: during the dry season, when Lake Chad was shallow, Mohamed could farm; and during the wet season, he could fish or graze his cattle.

But then things began to change. In the 1970s and 1980s, a severe drought struck the Western Sahel, destabilizing the entire region. There was a rise of armed groups such as Boko Haram, which terrorized the area and forced villagers to flee their homes—though also offered services that national governments couldn’t provide. State militaries fought the armed groups with heavy-handed tactics that were felt throughout communities. Military restrictions to Boko Haram territory prevented Mohamed from accessing the lake. His family was driven from Nigeria to Chad, where they quarreled with their new neighbors over fishing rights. Things got so dark that Mohamed’s daughter decided she would rather join Boko Haram than go hungry or live in a refugee camp. 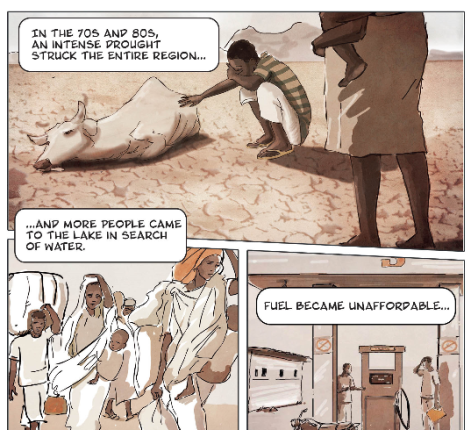 Mohamed is a composite character, but his story is very real. Over 10 million people in the Lake Chad region need humanitarian assistance—five million are acutely food insecure—and climate change is exacerbating their problems.

In June 2019, with support from the German Federal Foreign Office, our team at adelphi completed a two-year climate fragility risk assessment of the Lake Chad basin. The research resulted in some surprising and important conclusions. First, Lake Chad is no longer shrinking as it was between the 1960s and the 1990s, but actually remains stable. This has significant implications for how governments respond to the crisis: rather than spending billions on a canal to refill the lake, decision-makers need to take steps to address the root causes of conflict in the region.

Second, even though the lake is no longer diminishing, climate change is having a serious impact on the region, including violent conflict. While conflict is undermining communities’ abilities to cope, climate change is creating additional pressures. Unpredictable rainfall is taking a toll on farmers’ livelihoods. Extreme weather events are increasing in intensity and frequency, further crippling livelihoods and complicating political and economic conditions.

Third, climate change, conflict, and governance issues cannot be addressed individually. In fact, unless taken together, interventions will fall flat. By climate-proofing security and development policy, building social cohesion between communities, and improving access to basic services, integrated approaches to addressing crisis in the region can address the root causes of the crisis, and, at the same time, avoid the unintended consequences of single-sector responses.

With such a comprehensive report to share, we wanted to pull out all the stops. We produced the usual multimedia outputs, from a video and photo exhibition, to infographics and maps. But for the first time, we also told the story through a graphic novel, published in both English and French. Mohamed’s story is based on more than 200 interviews with a variety of religious, occupational, and ethno-linguistic groups living around Lake Chad. Our hope is that the helps readers empathize with the 10 million people in need of aid through the eyes of a person striving to feed his family in the face of governance failures and a climate crisis.

Noah Gordon is Project Manager at adelphi on the Climate Diplomacy team.